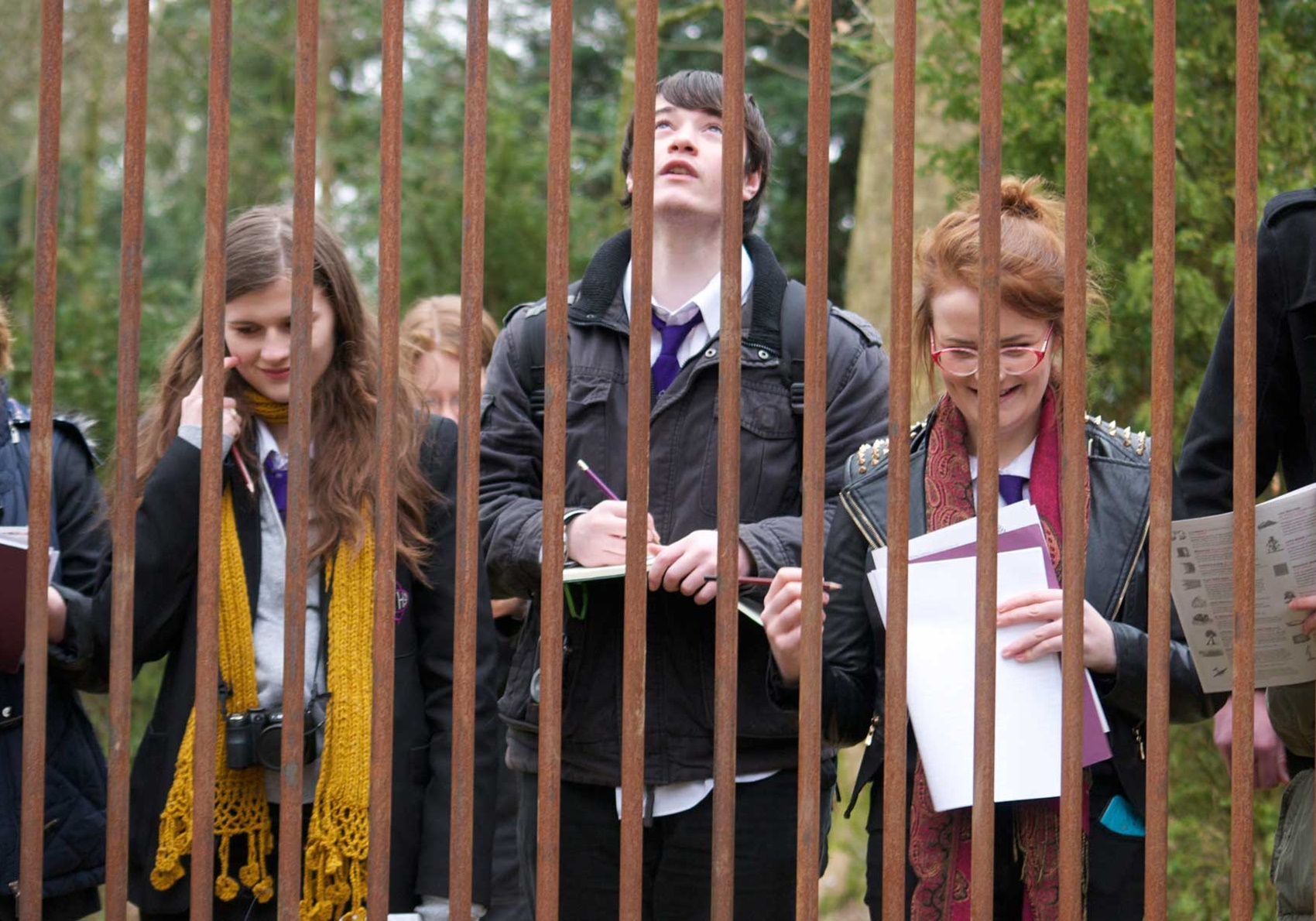 Over the last 5 years we have worked in various ways with different groups to deliver literary based workshops. Some of these activities have been longer projects with definitive outcomes, others have been one off writer led workshops and others have been continuing relationships with individual schools. The combination of artwork created by leading contemporary artists and 100 acres of woodland when teamed with nature and seasonal change acts as a very strong catalyst to writing activities. Many of the artworks at Jupiter are literary based and the conceptual nature of contemporary art stimulates questions and responses to this work. All of these elements add up to a strong stimulus for creative writing.

James Young High School (JYHS) from Livingston have worked with the Jupiter Artland Foundation over the last 4 years on literary based workshops. These workshops have been opportunities for the Advanced Higher and Higher Englsh pupils to develop pieces of writing for their creative writing portfolios which count as 30% of their final exam. Three out of the four sessions were led by poets. 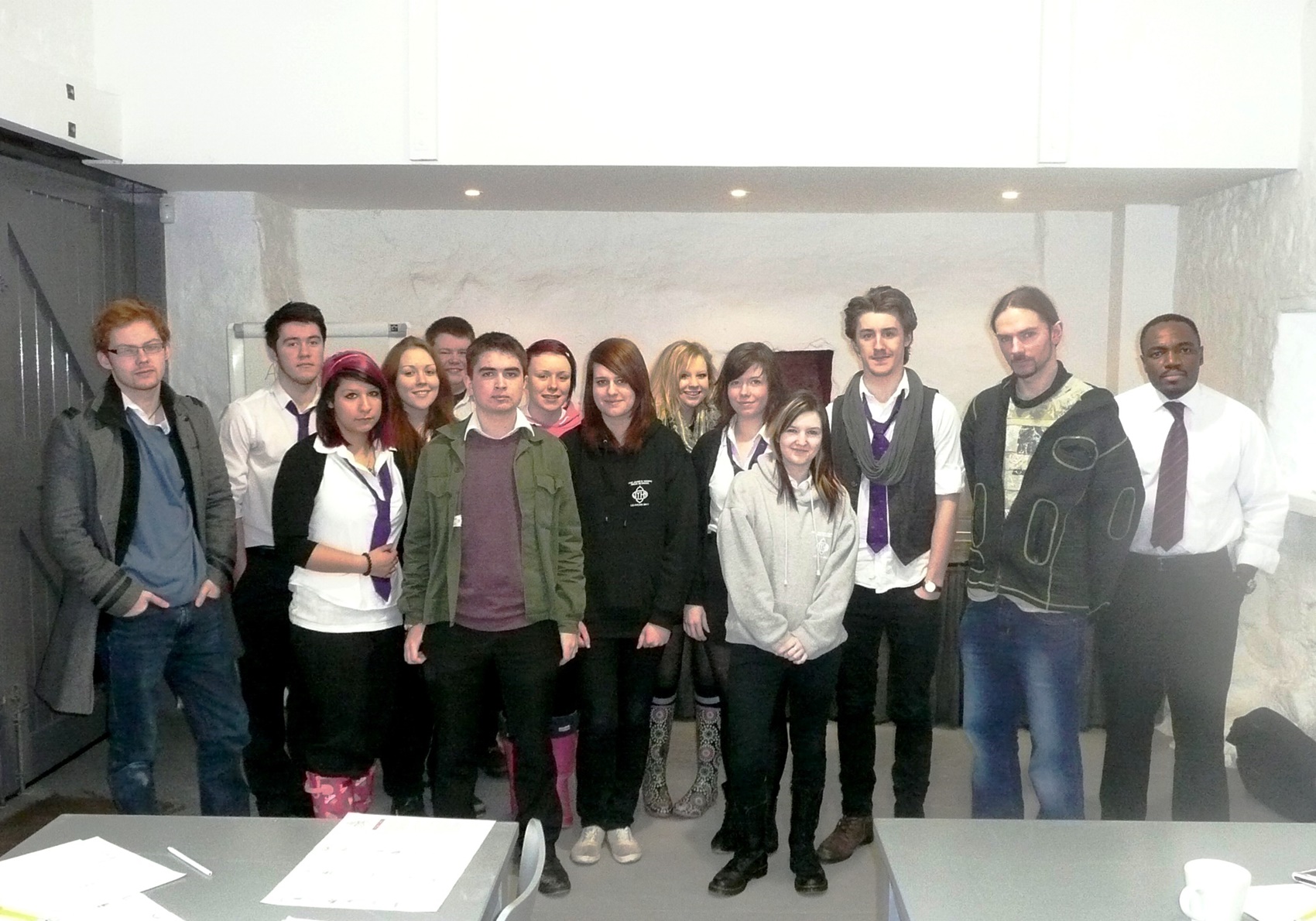 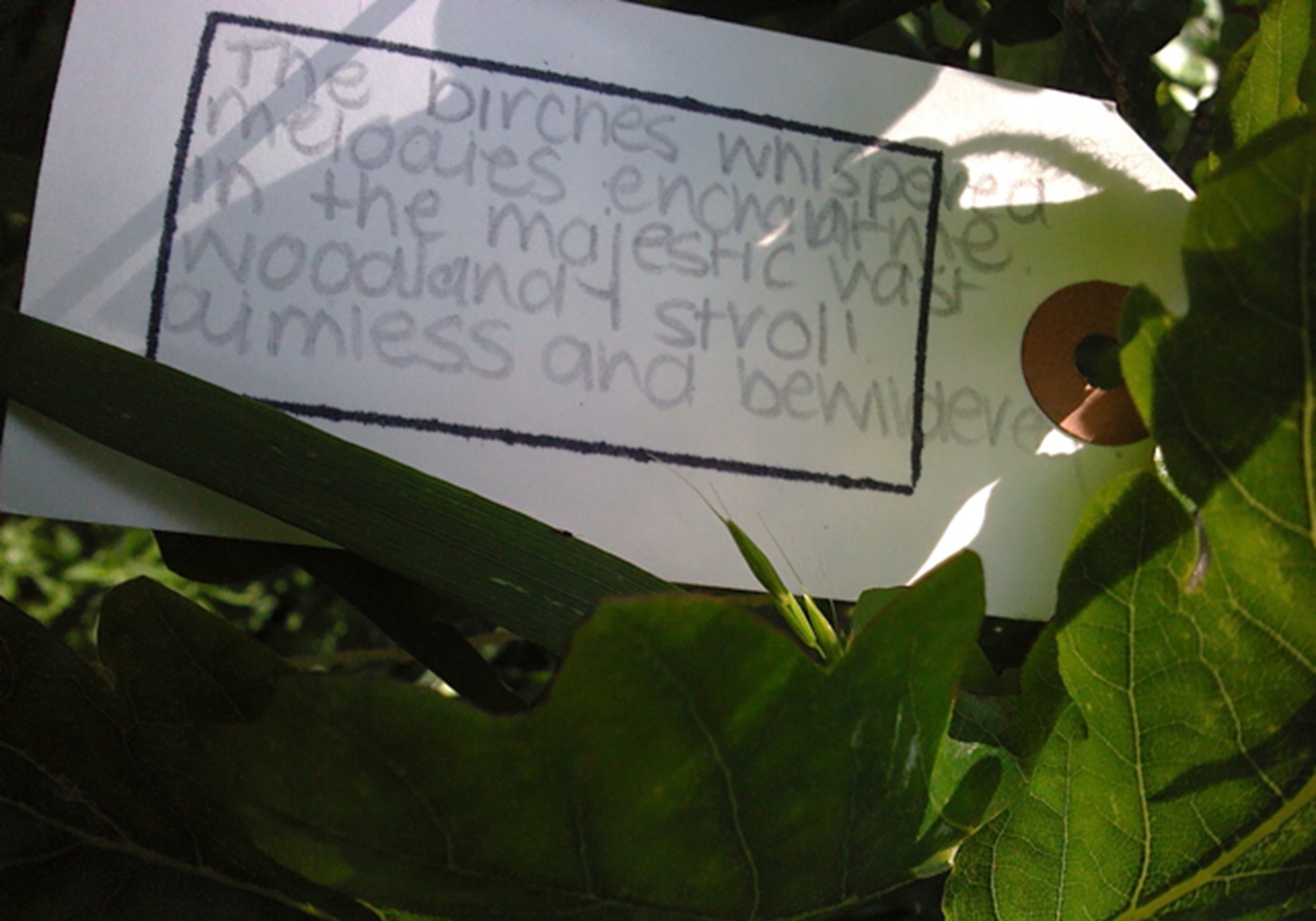 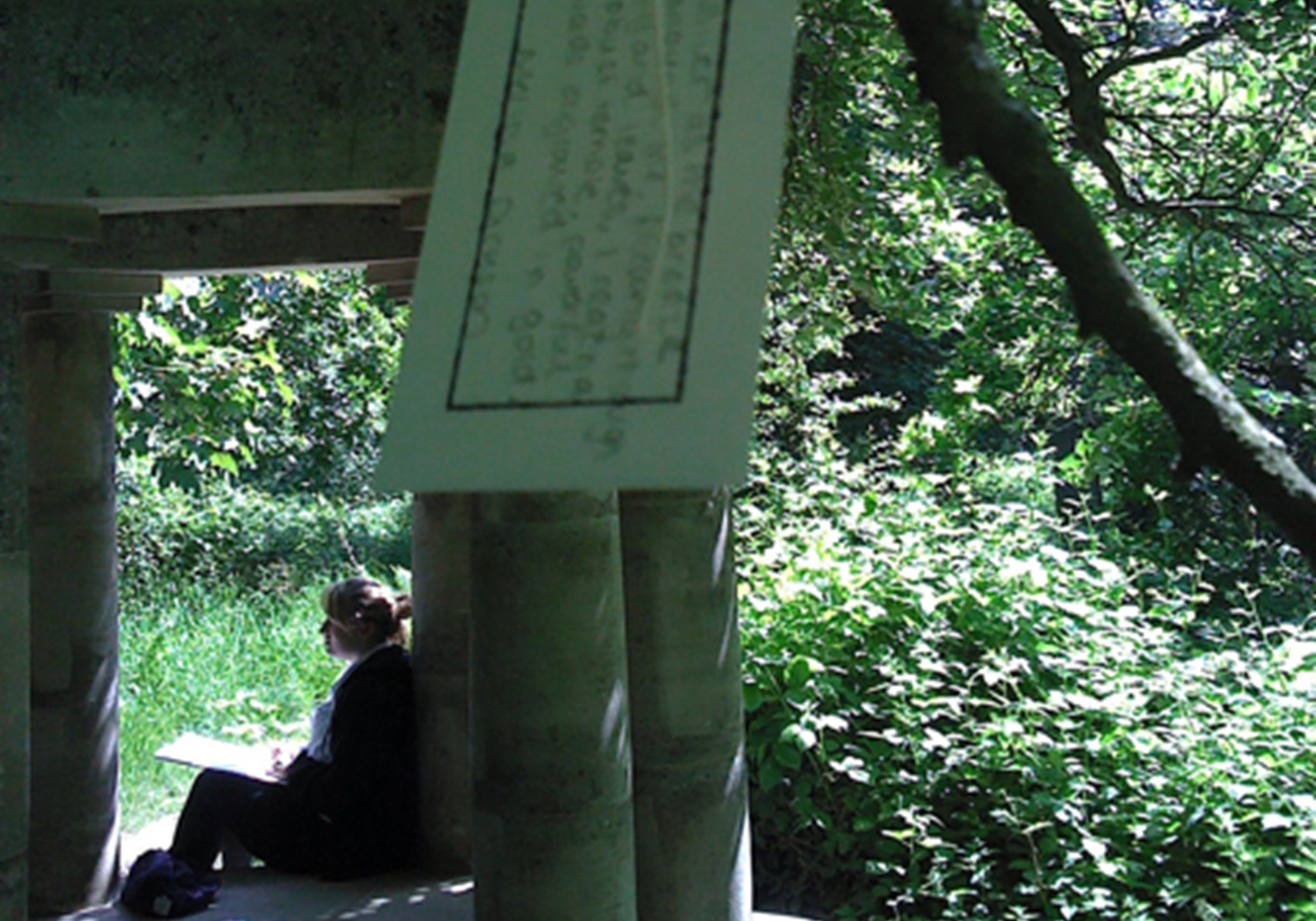 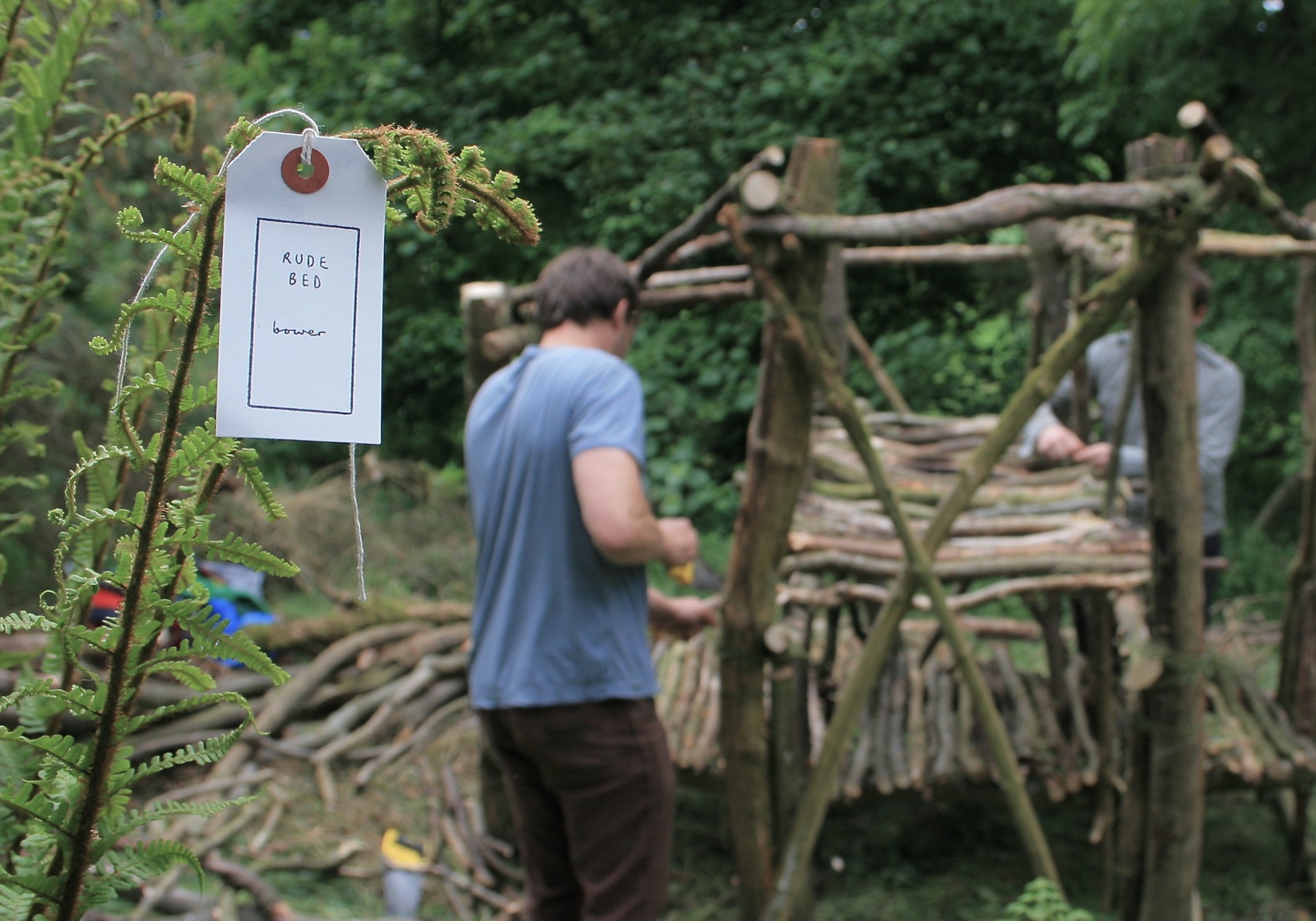 The first visit came about by an English teacher seeing the potential of Jupiter Artland as a place of inspiration.

This was our first ever non art and design group and we responded by linking the workshop to one of our artworks – Mesostic Remedy by Alec Finlay. The evaluation of the session found that the importance of place had a big impact on the student’s writing:

“The student’s found this to be perhaps the most inspirational aspect of the visit. At one point a couple of students were sitting, writing, under the trees to soak up the atmosphere. It was clear that the visit to Jupiter had a very positive impact on their writing. I could see the elements of our visit in their creative writing, especially when I came to aspects of setting in their short stories.”
Foday Mannah JYHS

In March 2011 JHYS took part in a workshop led by award winning performance poet Ash Dickinson, who describes himself as a poet, rapper, slam performer and comedian.

Dickinson aims to inspire young people with a loose and informal rap performance style of poetry which has content that is relevant to them – celebratory culture, the beauty industry and other issues that affect teenagers. Ash has worked with Jupiter Artland on a few occasions and used the Artland as a starting point for this session. The 15 pupils rated the session as excellent and said they had never experienced poetry like this before!

“The workshop was the pupils’ second visit to Jupiter Artland in the same calendar year. The workshop on slam poetry afforded the pupils an opportunity to experience a very unique dimension to literature, wherein a poet performed his original work live. The experience was fulfilling and fitted in perfectly with some of the requirements of the Advanced Higher course.”
Foday Mannah Teacher, JYHS

The writing workshop was centred on Seamus Heaney’s Sweeney Astray (1984). This is his version of the medieval Irish work Buile Suibhne, whose hero, Sweeney, is a king who undergoes a series of adventures after he is cursed by a saint and turned into a bird at the Battle of Moira. The poetry spoken by the mad king, exiled to trees and slopes, is part-lament for the life he has lost, and part-celebration of the natural landscapes he encounters.

Within the workshop we explored the area where Alec Finlay’s new version of Sweeney’s woodland lair had been built at Jupiter Artland and we named the plants and considered their qualities. Ken Cockburn wrote a full account of the schools workshops he run including all the poetry generated by the pupils – download Sweeny’s Bothy – Schools Workshops with Ken Cockburn here

“Pupils seemed liberated by writing in situ. It allowed them to write about setting with confidence. I also overheard a couple of students say that they were going to do something like this on their own. This was definitely a new approach for them and there were clear signs of their experiences across their folios.” Teacher, JYHS

A group of JYHS Advanced Higher Engligh pupils visited again in November 2014 to take part in a creative writing session with Jupiter’s Poet in Residence Marjorie Lotfi Gill who writes ekphrastic poetry, which is writing stimulated by artwork.

For Autumn Term 2014 Jupiter Artland were pleased to welcome their first Poet in Residence, Marjorie Lotfi Gill – Marjorie led a workshop with JYHS inspired by her background in ekphrastic writing. The session was based on 4 sculptures, Stone House (Andy Goldsworthy), Weeping Girls (Laura Ford), Firmament (Antony Gormley), Suck (Anish Kapoor) and involved introductory exercises to help generate a ‘way in’ to the pieces, such as making lists of physical words and close observation of a small piece of the sculpture. Using word banks pupils were given time to work and develop longer pieces of writing. Download the full lesson plan for Ekphrastic Writing workshop with Marjorie Lotfi Gill here

“I felt so inspired and the silence in the place was brilliant. It was also great to be around the real poet.” Pupil, JYHS

“I felt really inspired when walking around and the structure of using words then forming the story really worked for me.” Pupil, JYHS 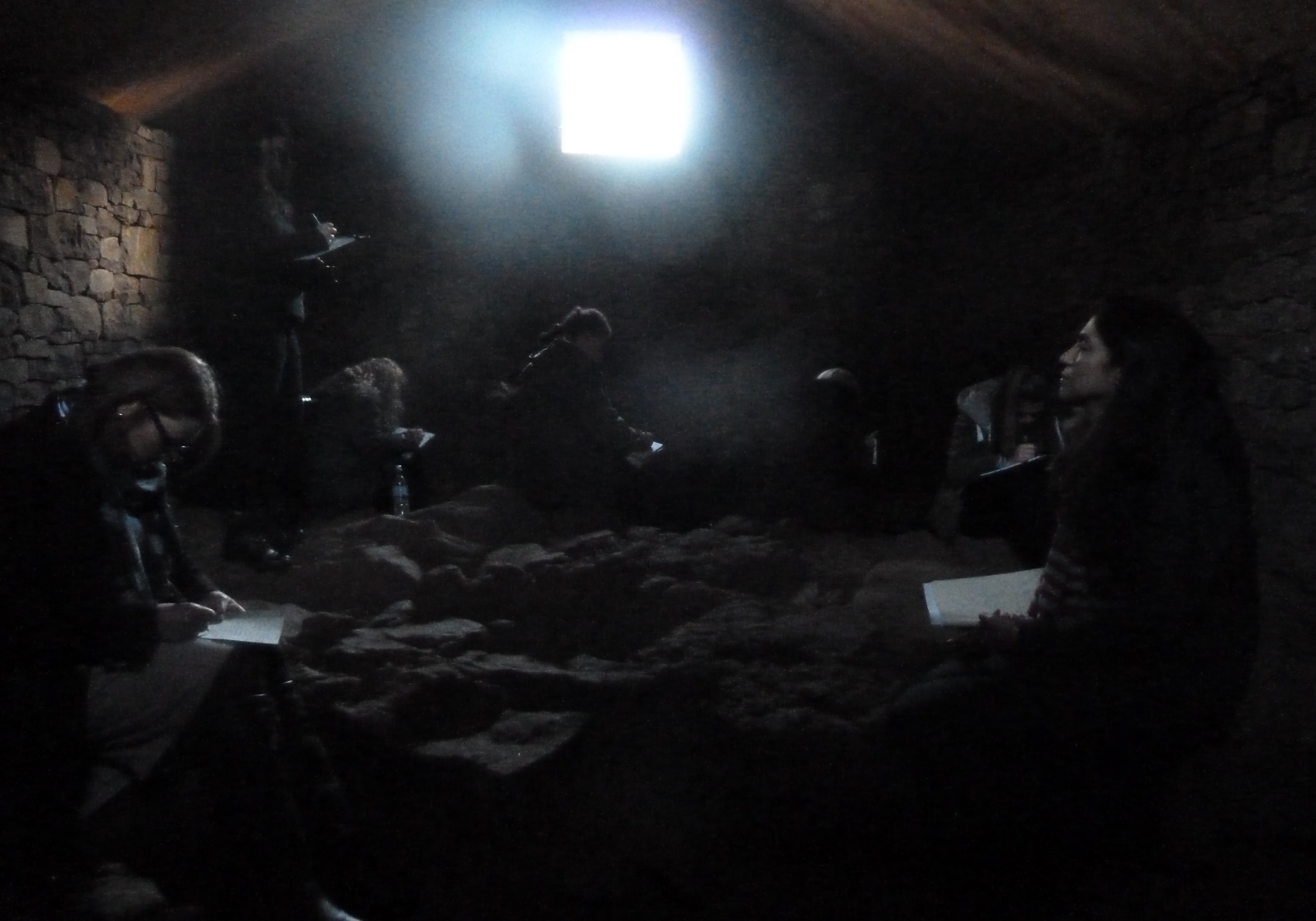 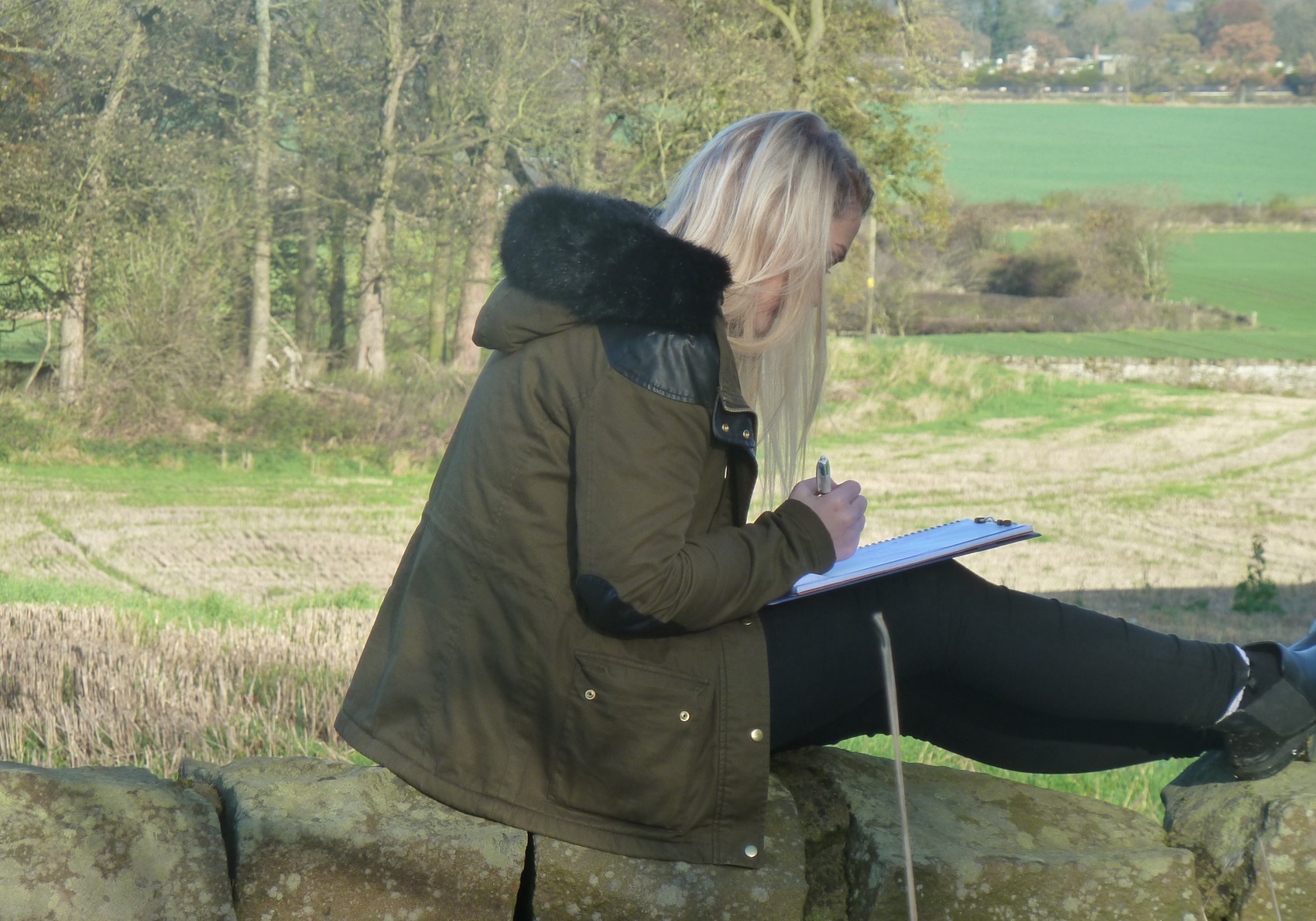 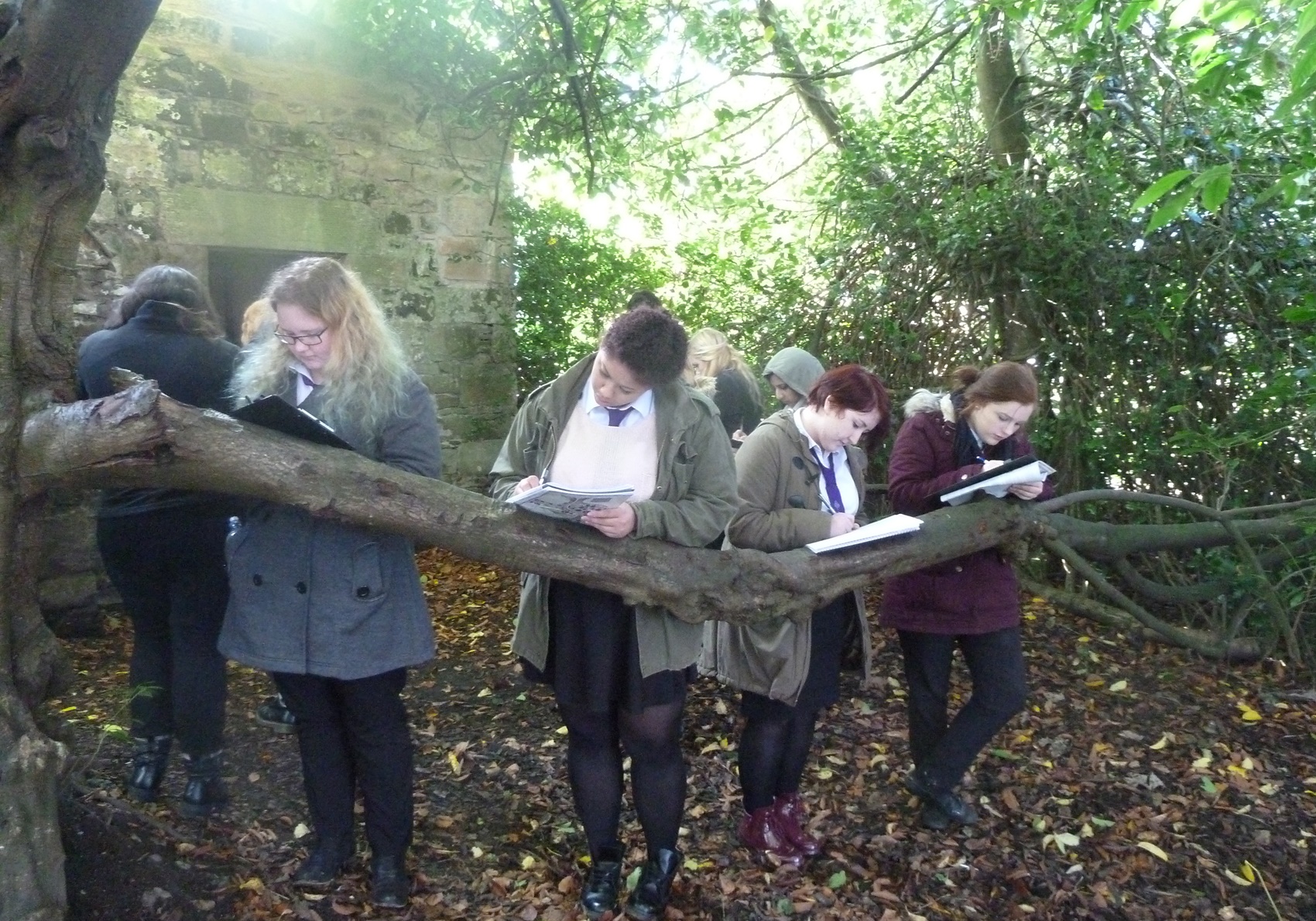 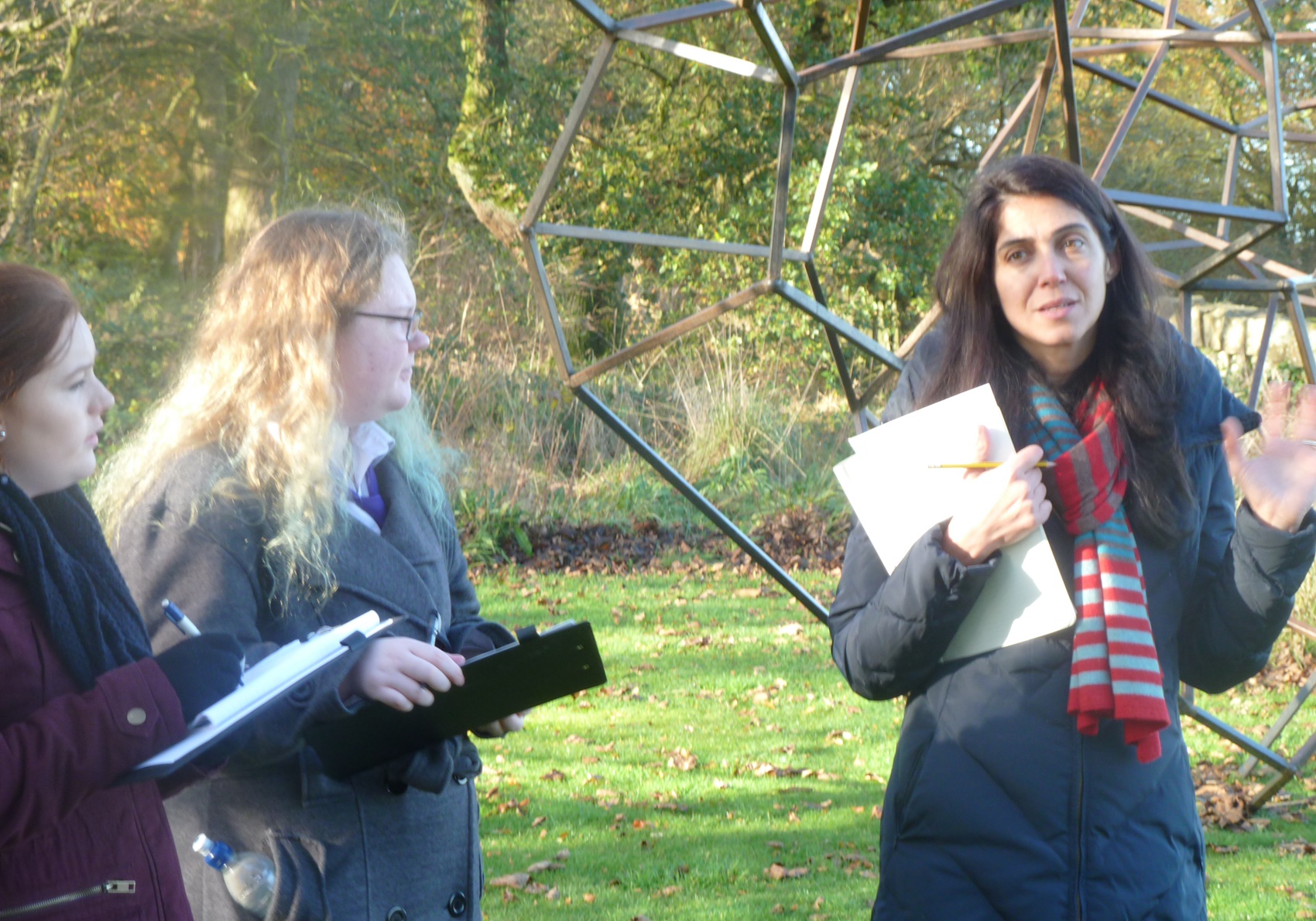